THE WOLF IN SHEEP’S CLOTHING

Once upon a time, not so long ago, all hardtails were cut from the same bit of Spandex®. Each and every one of them were wispy, razor-sharp racing machines. And while Specialized has nothing against that, Fuse isn’t that kind of hardtail.

The Fuse is snappy, confident, built to take a beating, and happiest on trails that make other hardtails cry. Fuse is a wolf in sheep’s clothing, a Stumpjumper without the squishy bits. It’s a bike in the key of badass. 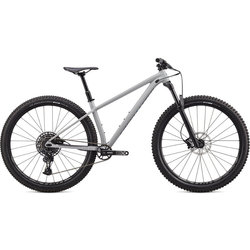 Kudos to the Specialized industrial design team and engineering shop who exorcised their obsessive-compulsive demons while sweating the details—every one of which improves ride quality. The wide-diameter down tube boosts bottom bracket stiffness. The low-slung top tube gives you the clearance to maneuver and throw the bike around on tight trails. Precisely-shaped seatstays give you the clearance to fit up to 29x2.6” or 27.5 x 2.8” tires with room to spare.

Adjustable dropouts on the M4 aluminum Fuse frame let you run the Fuse geared or single-speed. The same dropouts also enable you to tweak chainstay length a good 15 millimeters, lengthening the rear end for more stability or shortening it up for quick, nimble manners.

The Fuse is a piece of rolling art—the kind of functional art that has you dragging handlebars in corners, braking way too late, and making indecent growling noises mid-ride.

Is there anything less enticing than the word “geometry”? Maybe “dental exam” or “cat litter”—maybe. But here’s the thing. If you fail to nail the geometry, all the advanced frame materials and innovative design touches in the world amount to nothing out on the trail. The Fuse gets it right. The long reach gives you even weight distribution. The slack head angle lends confidence on steep and sketchy descents. The steep seat angle makes quick work of cleaning technical climbs.

Calm under pressure, yet deft and precise—the Fuse is dialed.

AND BUILT TO SHRED

Specialized geeked out where it counts with truly trail-capable components. For starters, they increased the suspension travel. RockShox forks now lead the way with 130 millimeters of travel and burly chassis. Stout Trail wheelsets, equipped with Boost 110/148 spacing and thru-axles, shrug off abuse. Each Fuse also sports a 1X drivetrain. Fuse Expert and Comp models get the full SRAM Eagle 12-speed treatment, with massive gear ranges that let you tackle the biggest climbs without coughing up a lung.

The M4 Aluminum models have a 29x2.6” tire and wheel combo, while the A1 Aluminum version comes in a 27.5 x 2.8” flavor. Going 29er gives you agile yet precise handling. Opting for the plus-sized version, on the other hand, gets you tons of traction and a calm, planted feel over rocks and roots.

Want to move up or down a wheelsize sometime in the future? Go ahead. All Fuse frames are compatible with both 29 and 27.5+ wheels and tires.

TAKE THE NEW SPECIALIZED FUSE FOR A TEST RIDE TODAY